This week on Thursday, we had our Master Class, the Master Class is when we get all the students together from all programs including kids and adults. We do it at 7 p.m, and we usually go over a subject and showing them a series of techniques or system in BJJ.

It’s like a seminar but it’s in-house seminar, in-house workshop. So we show the students, the basic concepts of a given situation or position.

This time we talked about the single leg half guard. By the way we are doing a lot of a half guard lately but there are couple of styles of half guard.

I found that It’s good to put a name on techniques or systems, so students can differentiate and recognize each situation, and what to do from each situation.

In the case of the half guard shownd here, they are all very similar, but there are little things, little hooks and little grips here and there that differenciate them, making people calling it by different names, like single leg half guard, old school half guard or coyote guard.

These details make up the whole difference.

So me and Prof. Nathan started the seminar showing the Old School Half Guard. It’s a very nice way of doing half guard and Professor Gordo is the one who started developing it.

We showed 3, 4 or maybe 5 steps on what to do from that position. That brought some understanding into the students so they get to know the game by doing the first system.

From there on, we showed the Old School 2.0 or also known as The Coyote Guard which was developed by an athlete called Lucas Leite.

The Coyote Guard is very similar to the Old School but that are two points that change the game, one is a hook that you do with leg that does not exist in the old school and the second one is the pit stop in the called dog fighting also didn’t happen much in the Old School.

Then we finally showed the single leg half guard which in many times does not need the coyote guard hook, but sometimes the hook is needed.

So, it‘s a mix between the Old School and Coyote Guard plus with a different grip, a lapel grip that again changes the whole game and makes the difference in being able to sweep a partner or not. 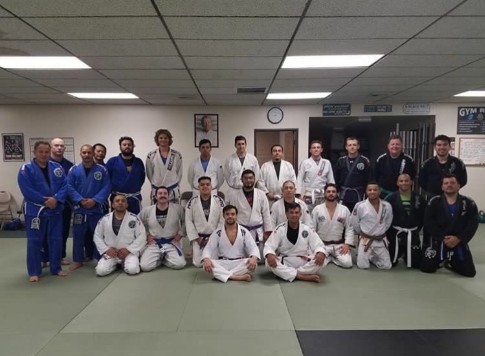 We showed these three guards and showed 5-6 steps and situations for each one of them, of course there are way more to do but I like to keep it simple with 4 – 5 steps or maybe 6 steps and then from there, students must, study on their own and get better at it.

At the end, it was very, very nice to see the student’s understanding the game and the differences among them.

The in-house workshops or in-house seminars are not something very uncommon, at Sampa BJJ, we actually have those master classes every month.

I hope you liked this article, I talked about single leg half guard -old school half guard and the Coyote Guard. Three ways to do half guard and be able to, be more successful in your sweeps and back takes. If you wanna learn Brazilian jiu-jitsu, it’s 626-335-4971 in Glendora and 626-977-1050 in Walnut.